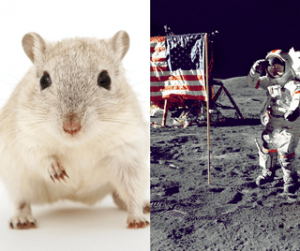 Most people have seen the images and videos of astronauts running on treadmills that they are strapped down to, and this is necessary because astronauts lose huge amounts of their muscle mass during extended space travel. This is not all that is involved in astronaut recovery from space travel though, the exercising is often not enough though as astronauts still lose a shocking amount of muscle while in space and have to go through recovery. However, this issue may be solved soon with the trial of a chemical called myostatin being tested in mice.

Myostatin is a protein that limits muscle growth that was discovered in the 1990s by Doctor Se-Jin Lee. It was discovered then that when the gene that creates this protein was deleted in mice there was a dramatic increase in muscle mass when compared to normal mice.

Space Trial Of Myostatin And Activin-A

Earlier this year, Doctor Lee got the opportunity to test his theory that taking out myostatin would help the muscle loss associated with space travel and eventually aid astronaut recovery when he was able to send 40 mice into space aboard SpaceX’s CRS-19 on its cargo resupply services mission. 24 of the mice were left natural, while 8 mice were those with the gene to produce myostatin removed, and 8 more had a chemical to suppress myostatin and another protein with a similar effect called activin-A.

After the mice returned from space after 33 days in space the mice that came back had different effects:

This discovery could be a breakthrough for helping astronaut recovery from muscle loss during space travel, but it is also important to remember that these trials were conducted on mice and may not translate to humans. However, if the treatment works on humans it could be a massive leap forward for traveling space safely.