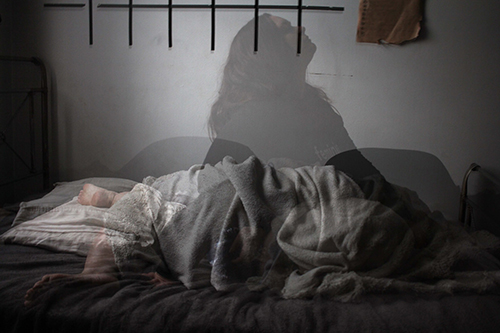 According to a study by the CDC, one-third of American adults do not get enough sleep on a regular basis. The American Academy of Sleep Medicine and the Sleep Research officially recommends that “adults aged 18-60 years old sleep at least seven hours each night to promote optimal health and well being.” However, it is not uncommon to wake throughout the night and have trouble falling back asleep. For millions of people, this creates “sleep anxiety” as it is believed they need to sleep continuously through the night. But what if sleeping in eight-hour blocks is not our natural sleep pattern? History suggests a period of wakefulness occurring between two separate sleep periods was the normal way humans slept prior to the Industrial Revolution. Some experts believe today’s sleeping problems may be rooted in the human body’s natural preference for segmented sleep as well as the use of artificial light.

The Industrial Revolution (1760-1840) marks a pivotal moment in the history of labor, where the manufacturing of goods moved from small shops and homes to large factories. This shift brought a change in culture as people moved from rural areas to urban cities in order to work. The introduction of large scale gas lighting allowed factories and stores to remain open longer than with candles or oil, allowing nightlife to flourish. Indoor and outdoor areas could be lighted more than ever before. Every aspect of life was influenced by the industrial revolution from average income, standard of living, and population growth. It also had a profound effect on the way humans slept.

Prior to the 18th century, much of humanity used to sleep in two distinct chunks, says historian Roger Ekrich in his book At Day’s Close: Night in Times Past. These two periods of segmented sleep were often referred to as “first sleep” and “second sleep”. In his research, Ekrich found hundreds of references to the two “sleeps” going as far back as Homer’s ancient epic Odyssey, composed around 800BC. First sleep began about two hours after dusk, followed by a waking period of one or two hours and then a second sleep. During this waking period, people would continue to rest, read, write in journals, pray, have sex, sew, chat with their housemates, smoke tobacco, or even visit neighbors. They would then go back to sleep until morning.

Not only did the Industrial Revolution bring change to our sleep, but social attitudes toward nighttime also began to shift. The night was a scary time for most people, even the wealthy who could afford to live by candlelight. It was a time of day for criminals, prostitutes, and drunks. But as light technology grew more prevalent, socializing at night became fashionable and spending hours lying in bed was viewed as a waste of time. Thus, sleeping patterns adapted to access these new later hours. “People were becoming increasingly time-conscious and sensitive to efficiency, certainly before the 19th Century,” says Roger Ekirch. “But the industrial revolution intensified that attitude by leaps and bounds.”

Today, we still see evidence of our body’s clock lending itself to a segmented sleep schedule. For example, many cultures such as in Spain, Italy, China, and India, take an afternoon snooze or we experience the post-lunch dip phenomenon. A NASA-backed study found that letting subjects nap for as little as 24 minutes improved cognitive performance. Further demonstrating our natural bi-modal sleep pattern is a study on human circadian rhythms where artificial light was removed from test subjects for 14 hours a day. After a month, participants had a distinct 2-phase sleep pattern, sleeping first for four hours, awake for one to three hours, before falling into a second 4-hour sleep. Given a chance to be free of modern life, it seemed the body naturally settled into a split sleep schedule.

The eight-hour workday does not allow for this type of flexibility, thus our ancestral rhythms have been disrupted by modernization. Many experts believe sleep disorders, like insomnia, are rooted in the body’s natural preference for split sleep. “For most of evolution we slept a certain way,” says sleep psychologist Gregg Jacobs. “Waking up during the night is part of normal human physiology.” The idea that we must sleep in a consolidated block could be damaging, he says, if it makes people who wake up at night anxious, as this anxiety can itself prohibit sleep and is likely to affect waking life too.

We hope this information on the eight-hour sleep myth was insightful and helps you avoid the frustration of lying awake at night.

Stay on top of your health. If you have questions about your Medicare coverage, call Empower today. Let us help with your Medicare questions so you can get back to the activities you enjoy the most. 1-888-446-9157 or click here to get an INSTANT QUOTE