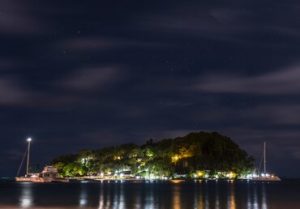 A Volcanic Eruption in the Caribbean happened last Friday as La Soufriere in St. Vincent has erupted for the first time in over 40 years. On the northern end of St. Vincent and the Grenadines, La Soufriere has been dormant since 1979, until Friday morning when the volcano moved into an explosive state with plumes up to eight kilometers high and ash beginning to fall upon the island.

According to the country’s emergency management, ash fall had been reported as far as the country’s airport, which resides on the southern part of the island some 12 miles away from where the volcano is, on the opposite side of the main island. The first eruption, occurring in the morning, was followed by another explosion that was not as dangerous as the first.

On Thursday, Island officials had raised the alert level after detecting several tremors and seeing steam clouds come out of the volcano’s peak. Approximately 20,000 people were evacuated from their homes surrounding the volcano. Of course, with the COVID-19 Pandemic still being prevalent, the evacuation process was not easy. Multiple cruise companies have sent their massive ships to the island in order to evacuate people, however vaccinations are required to board. The nearby islands who are accepting refugees will also require vaccinations to be on their islands. The eruptions could last up to weeks, giving the entire St. Vincent island a very unsettling feeling as they try to handle the aftermath of a volcanic eruption combined with keeping people safe during the COVID-19 pandemic.

It will take a massive humanitarian effort from neighboring islands and other helping hands to help St. Vincent safely navigate their first eruption since 1979, which saw ash fly as far as 1,000 miles, landing on the island of Barbados. The last big eruption before that was just at the turn of the 20th century, which killed over a thousand people. On an island which is approximately 12 miles long and 5 miles wide, the amount of space needed for a full evacuation is limited and being used to the best of their abilities, with older and at-risk people being placed in temporary housing as opposed to shelters, which is where some people will reside for weeks, if not months after the eruptions are over.

We hope this information on Volcanic Eruption in the Caribbean is helpful to you.