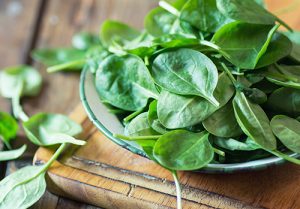 Spinach is a popular leafy green vegetable with many different health benefits. You’ve likely eaten it before! I myself like the throw a handful of it into my health smoothies. Spinach has always been a favorite of mine and part of that has to do with my childhood fascination with it. I distinctly remember watching Popeye the sailor whip out his can of spinach and dump the entirety of it in his mouth to activate his super strength. I used to open up my own can and envision myself becoming stronger as I ate it. Recently, I’ve wondered, why spinach? Why not broccoli or carrots or any number of other perfectly healthy vegetables? I took it upon myself to find out why spinach became culturally prominent, and I think that you, like me, will be surprised by the answer.

How One Typo Changed Everything

It all started in 1870 when a German chemist mistakenly placed a decimal point. Instead of reporting that spinach had 3.5 milligrams of iron for every 100-gram serving, a typo was made and it read 35 milligrams— a huge difference! The news spread and soon became a “fact” among the general population. The misprint was not corrected until 1937, but by then it was too late. During the conception of Popeye, the suggestion was made that he should eat spinach for his super strength— seeing as everyone knew it was an incredible source of iron. The show became iconic and influenced Americans to the extent of increasing spinach consumption by a third!

The REAL Benefits of Spinach

While the vegetable may not be the iron superstar it was once believed to be, it is still packed with other vital nutrients for our bodies. Today, we know that it is actually more of a vitamin K star, and a single one-cup serving exceeds the daily recommended value. Spinach is also a good source of lutein, which is critical for eye health. Other nutrients include vitamin A, vitamin C, and calcium to name a few.

We hope that this information on the great spinach typo is useful to you.