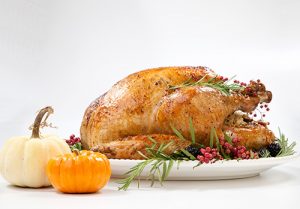 The turducken is a curious creation… a chicken inside of a duck inside of a turkey? Oh, and don’t forget to layer it with stuffing! Interestingly, I’ve never tried a turducken— but don’t worry— I plan to remedy that situation at this year’s Thanksgiving.

The turducken can be made with many different stuffing variations. There’s seafood, boudin, cornbread, jalapeno cornbread, and jambalaya stuffing to name a few. About half of my family has ties to New Orleans and Cajun culture, so I am shocked that I am just now discovering this dish. So, where did the turducken come from and how did it enter our mainstream Thanksgiving feast traditions?

Stuffing birds with other birds has been a tradition in various cultures across the world for centuries. In fact, there is one recipe listed in the 1807 Almanach Des Gourmands, referred to as the “roast without equal” that involves the use of SEVENTEEN different birds! The turducken is just one of many variations within the tradition of birds being stuffed with other birds. The turducken that has become popular in today’s American Thanksgiving culture is believed to have started with Cajun Chef Paul Prudhomme, who claims to have invented it in 1984 and he later trademarked the name “turducken” in 1986. Chef Prudhomme was serving up turducken’s locally and it remained more of a regional specialty until the late ’90s.

A Tradition Was Born

So, what happened that sparked countrywide interest in this creation? Football announcer John Madden was introduced to the turducken and fell head-over-heels in love with it. Madden began talking up turducken on air during the NFL Thanksgiving games. This became a yearly routine of his and he even went so far as to carve up a turducken on air! This was followed by him giving them away to winning players. Americans couldn’t help but be fascinated by Madden’s acute interest in the stuffed bird, and turducken demands started appearing around the country. Today we see them being offered throughout the country by various grocers in addition to specialty shops during the holiday season.

We hope that this information on the history of turducken is useful to you.